West Hoyle is a Cheshire Union affiliated Golf Club. Founded in 1939 it plays at Hoylake Municipal Golf Course every Sunday morning with tee times between 07:30 and 08:30 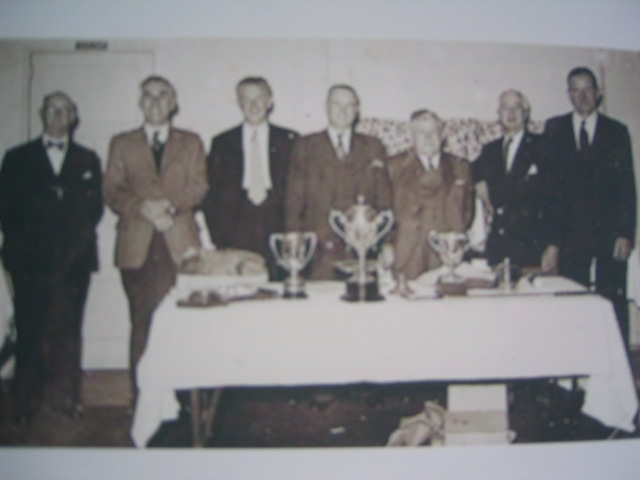 A Touch of History

West Hoyle Golf Club was founded in 1939 when representatives of two golf societies held a meeting at the home of one of their number.

It is known that the larger of the two, The Grange Golf Society, was well established and held their annual 'Musical Evening and Prize Presentation' at the Dee Hotel. Mr R Craig was reported in the local press, as having travelled up from London for just one such occasion. (Mr Craig later became the first President of the newly formed West Hoyle Golf Club). Of the other society, nothing is known, save that it drew its numbers from Hoylake and beyond, whilst the Grange drew its membership mainly from West Kirby. What is known is that at that meeting the two societies agreed to amalgamate.

The purpose of the amalgamation was, it is believed, the aspiration to become affiliated to the Cheshire Union of Golf Clubs. Such an affiliation would allow the new club to set handicaps, which would be universally accepted, (not the case with Society handicaps) and allow the dropping of 'Society' from their title and becoming a 'proper' Golf Club. It would seem that they were forward thinkers among our forebearers. The combined membership numbers ensured that their application to the Cheshire Union was approved.

West Hoyle must be unique as a Club in becoming affiliated to the Cheshire Union in the year of its founding, whilst playing on a municipal Course

So how did the name 'West Hoyle' come about? And how is that we have a lighthouse as a feature of our club badge? West Hoyle could just be an abbreviation of 'West Kirby and Hoylake', and the lighthouse, a reference to the danger of sand hazards to sailors and golfers alike. There is in fact a large sand bank in the Liverpool estuary named 'Hoyle Bank'! Quite whimsical our founders!

Having got off to a flying start, everything was put on hold with the outbreak of World War II. The Captain in 1940, Mr T Bridges, having taken over from the first Captain Mr. C.F.Lancashire, determined that all major competitions should cease for the duration of the War, in deference to all members who were away fighting for King and Country. Mr Bridges and his small committee in fact kept the Club ticking over for the next four years. We are much indebted to this gentlemen.

Since that time, the fortunes of the Club have ebbed and flowed, but West Hoyle and its members have always been at the forefront and solid supporters of new developments in local golfing.

In 1980, the Association of Merseyside Municipal Golf Club Captains was set up. A prime mover in this was West Hoyle Past Captain Mr W.L.Pate, who personally provided the Honours Board for the organisation. The AMMGCC is still going from strength to strength.

In 1985, largely through the initiative of West Hoyle Committee, an agreemment was reached with the leaseholder of the Cafe at the Municipal course, to use what we now know as our Club room; a room which had been unused for many years. Prior to that the Men's room of the Stanley Hotel was traditionally used by members as the "19th Hole" after a game.

In 1998 the lease was in fact taken over by the Clubs using the Municipal Course, under the "umbrella" of The '98Club (our Past Captain, Mr. P. Finlay becoming bar Chairman).

In 1989, West Hoyle's Jubilee Year, we became one of the few Golf Clubs attached to a Municipal Course to finance a Pro-Am Golf Competition for its membership.

In 1990, West Hoyle Golf Club organised, financed and promoted an Open competition, Wirral Borough Council having allowed us full use of the course for the day. With a full field and a prize budget of £1,000 a healthy profit was made. Since 1991 this competition has become known as the West Wirral Open, and is run jointly with Hoylake Golf Club.

In 2004 a Seniors Group was founded within West Hoyle Golf Club. With a membership of 26, the group plays every Tuesday morning - come rain, hail or shine!

It is regretted that West Hoyles initiatives in the 50's, 60's and 70's have not been catalogued, but given the track record of our Club, there must have been several.

As can be appreciated from the above, we as members of West Hoyle Golf Club have much to be proud of -

Long may it be so!